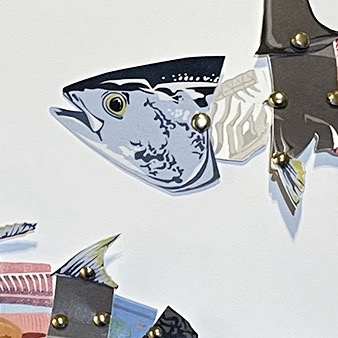 Until time will tear us apart

Description of the project:
"Summersnowglobalism" is an artistic and scientific study that analyzes the dominant perception of modern society on nature, which has become a physically manipulated object, and raises discourses related to the destruction of the ecosystem and climate change. Furthermore, a multimedia installation work called "Summersnowglobe", closely related to the contents of this study will be performed. In order to deal with this subject more practically, I would like to move from smaller worlds to the larger subject of analysis of modern society. “Smaller worlds” are represented as follows:

First, for me, the snow globe is representative of a kitsch ornament and a popular cheap souvenir as a legacy of capitalist globalism, and at the same time, it is an object that makes me think about the discourse on the perception of local and global space of the modern subject. Here, local space means the inner world including the miniature model as the content in the glass globe filled with water. The global space represents a distorted image of the local space mirrored on the surface of the glass globe and the image of the globe surface itself. At the same time, it is the imaged and reified form of local space. The global space itself is an actual physical space where fantastic values ​​of locality exist, whether it is a utopia or a dystopia. The physical spatiality of the snow globe allows those who play with it to exert a subtle influence on the local space. The local space enclosed in the glass globe is exposed visibly to the subject, but physical access for the subject to this space is forbidden. The curious animation that appears on the globe's surface leads the subject to perform a specific action. The gesture of holding the globe and waving it causes climate change in the local space. There is an avalanche of the inner world. However, for the subject in the outside world, the climate change inside is observed as a snowy landscape to behold. It makes me think about today's globalized world in terms of a snow globe. To the subject of the global world, local space can be 'toured', but cannot be 'experienced'. Lack of information and intermittent experience of locality prevents the subject from truly contemplating locality. For the subject, a global citizen born in the modern world, the cruelty of damage to locality caused by his external influence seems extremely neutralized.

Second, in my research, the seed of the poplar tree represents the airpocalypse of a hybrid form of nature and culture, artificially created by humans, as well as a natural element that has been physically manipulated for justification of the socialist ideology. Several media and institutions have published new research and articles on Beijing's poplar seed, explaining why they are so prevalent there every year. In the 1960s, Beijing was considered "a city on the edge of desertification". At that time, planting more trees to prevent sandstorms was the most pressing task. According to Mao Zedong’s insistence that “man must conquer nature,” the strategy for taming the wildness of nature and conquering its threatening force appears to be artificially mobilizing other natural forces that can counter it. Due to their growing time, dense canopy, and low cost, large numbers of poplar and willow trees have been planted and played a pivotal role in combating sandstorms in Beijing decades ago. The so-called 'hero tree', which overcame the climate catastrophe of sandstorms, partially justified the realization of Mao's socialist utopia. However, the Liaowang Institute notes a female poplar tree can produce about a kilogram of catkins during the spring breeding season. Millions of female poplar trees release poplar seeds weighing tens of millions of kilograms. The poplar tree, once an object to counter oppression by the desert, paradoxically oppresses the heroic man who once claimed to be his master. Humans are revealed as both the perpetrators and victims of the destroyed ecosystem. The spatial occupation of poplar seeds transcends the tension between human and non-human existence. It causes ethical confusion among human beings: Should we dispose of the poplar trees which are a new nuisance as well as a valued member of the adaptation to the city?

The snow globe goes beyond the curious material commodity itself born from the enthusiasm of globalization and tourism. It tells a discursive story about the modern subject's fantasy about globalism and the lack of awareness of locality and climate change. In addition, the story of Beijing's poplar trees suggests that the modern subject's dominant actions in the natural world and manipulation of space have led to the destruction of ecosystems and human-made climate change.

The “Summersnowglobalism” I would postulate comes from the 'snow globe' and the 'summer snow' symbolizing the storm of poplar seeds. It has to be understood that local space in the process of globalism has not been cared for or has even been abused indiscriminately. It leads to increasing spatial tensions between human and nonhuman beings and a conundrum of ethical and social agreements between human beings, as all of them are part of a destroyed ecosystem. 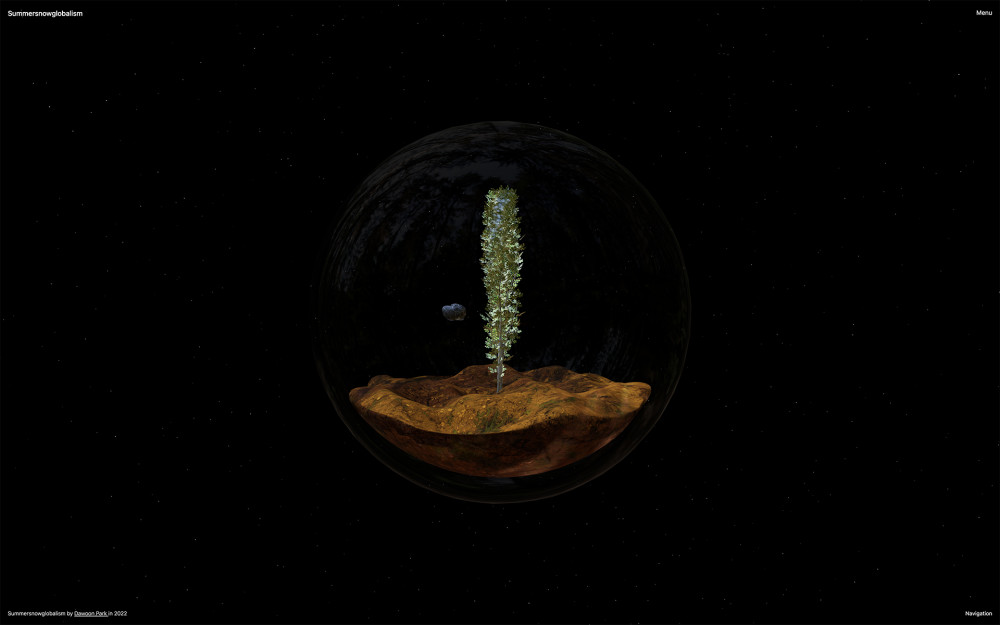 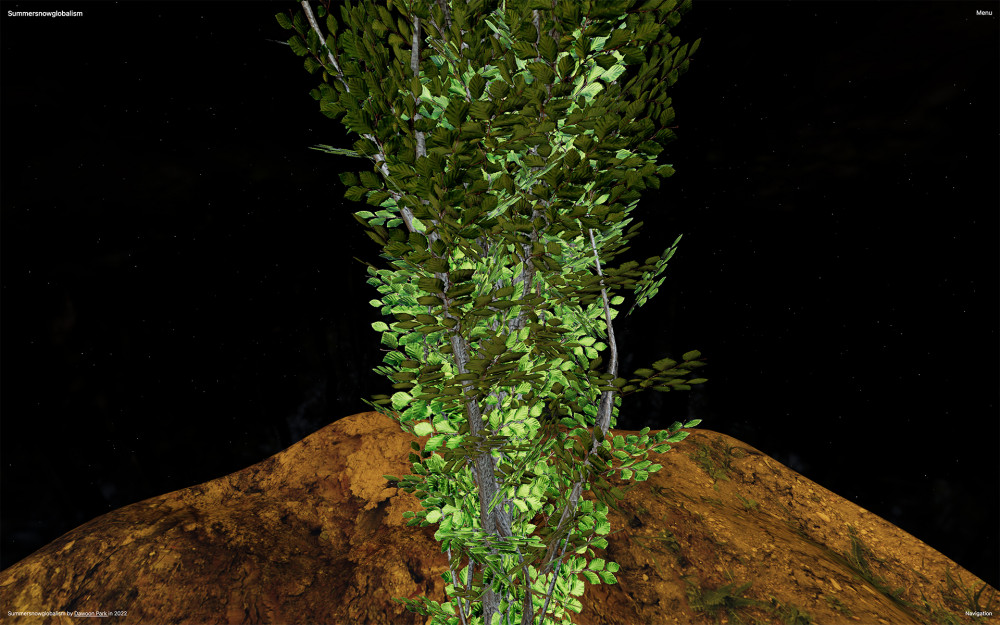 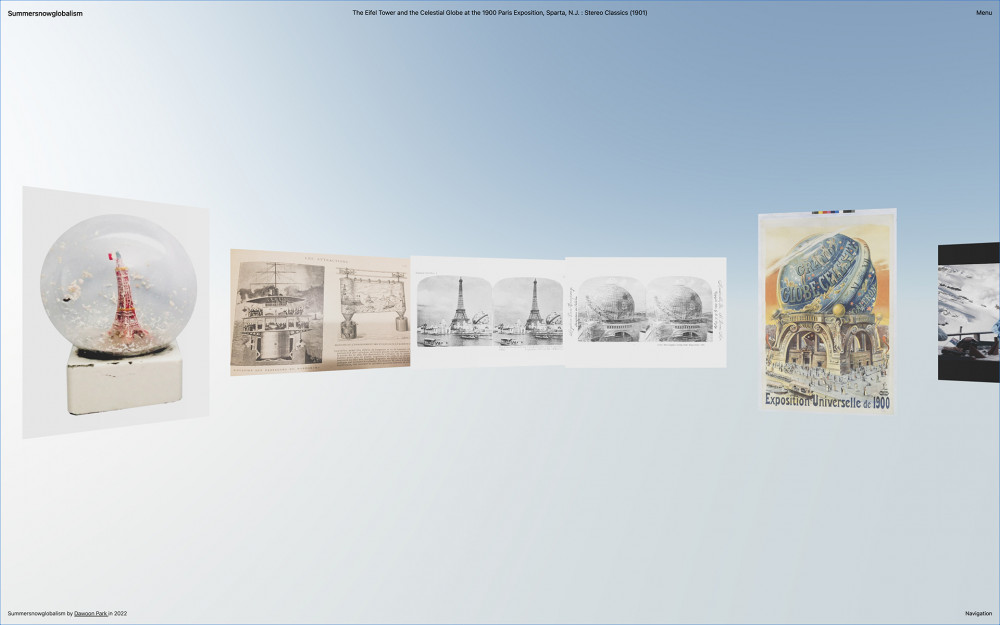 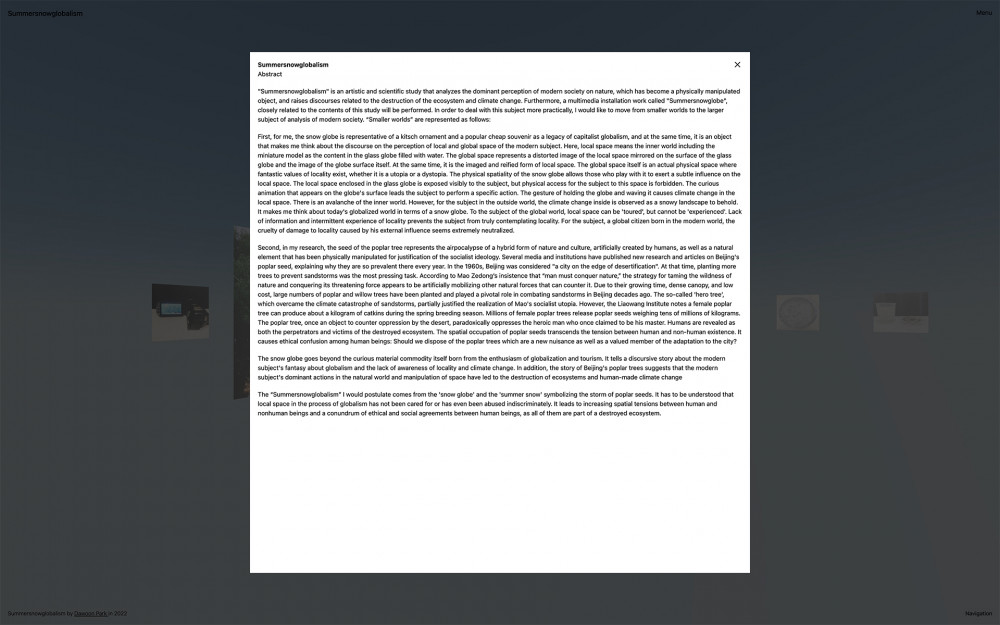